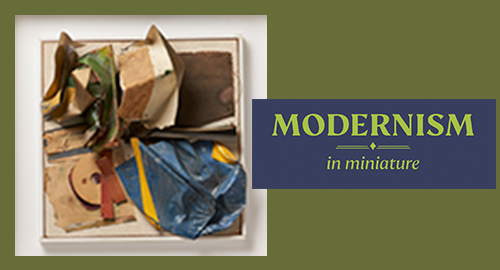 AT THE NORTON SIMON MUSEUM: 25 TINY WORKS BY SOME OF MODERN ART’S BIGGEST NAMES

At the Norton Simon Museum in Pasadena, northeast of central Los Angeles, the exhibition Modernism in Miniature is on view in a small, square gallery located to the right of the admissions desk. There, displayed on walls that have been painted a deep shade of navy blue, are 25 works from the museum’s collection dating from the early to mid-20th century. Arranged chronologically, they span a range of modern-art styles and movements, from German Expressionism to American Pop.

Among the big-name modernists whose works, in this unusual presentation, can be seen playing it small: Pablo Picasso, Marcel Duchamp, Lyonel Feininger, Joseph Cornell, Claes Oldenburg, and John Chamberlain.

Despite the exhibition’s provocative title, to describe each of the pieces on view as teeny-tiny would be inaccurate. That’s because, although all the artworks it presents are quite small, in a number of cases, they may be seen as reduced in scale relative to the proportions in which the featured artists here were known to have more typically worked; for example, a John Chamberlain piece on view measures roughly 12 by 12 inches and is microscopic compared to the large-scale, crushed-metal sculptures for which this artist is well known.