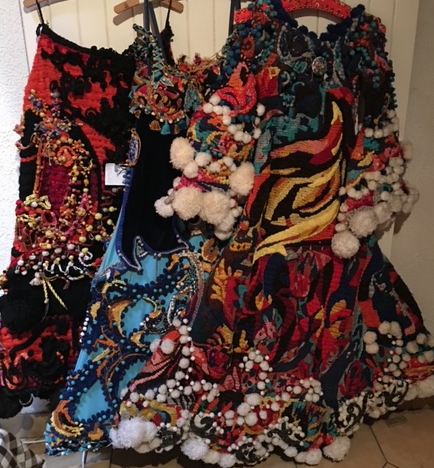 EXCLUSIVE REPORT TO COME: IN SWITZERLAND, A SURPRISING DISCOVERY OF A HITHERTO UNKNOWN OUTSIDER ARTIST’S PAINTINGS AND TEXTILE WORKS

During the 1940s, when the French modern artist Jean Dubuffet traveled through several countries in Europe on the lookout for examples of the unusual kinds of artistic creations he later collectively dubbed “art brut” (“raw art”), it was in Switzerland that he made some of his most significant finds.

Recently, in that country, a group of richly embroidered, mixed-media garments, paintings, drawings, and ceramics featuring ornate decorations was discovered in an old house by a foreign businessman who had purchased it with the intention of renovating it and living in it for a while or perhaps selling the refurbished property.

He learned that the maker of the paintings and odd garments he had found was the house’s last occupant, a reclusive woman who had lived there, alone, following the death of her father, a retired printer. Remarkably, several large, very heavy printing presses were found in the basement, too.