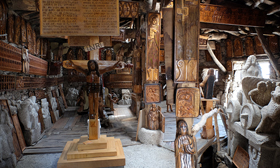 IN RURAL, NORTHWESTERN SPAIN, A SELF-TAUGHT ARTIST CELEBRATED A WAY OF LIFE THAT WAS FADING FAST

Based in northern California, where she taught art history and ran the campus gallery for many years at San José State University, while also serving as the executive director and curator of SPACES Archives, a nonprofit organization dedicated to documenting and advocating for artist-built environments on a global scale, Jo Farb Hernández has spent almost five decades researching environments created by visionary self-taught artists.

In particular, over the past 20-plus years, she has concentrated on such site-specific works across Spain’s varied terrain. Her book about this subject, Singular Spaces: From the Eccentric to the Extraordinary in Spanish Art Environments, was published in 2013; now she is working on a new volume that will examine 100 more unique, artist-made places in Spain. Exclusively for brutjournal, Hernández has invited us to dip into her notebooks, savor her revealing field work, and share her fascinating discoveries. This is the second of her reports based on her original, on-location research.

Galicia, the native region of the Spanish self-taught artist José Escuredo Vega (1917-2004), who was also known as “Pepe de Barrio,” is a land apart, with its own vernacular tongue — a Romance idiom sharing many similarities with Portuguese — that is recognized as one of Spain’s four official languages. This far-northwestern autonomous community of Spain also shares a long border with Portugal, engendering many transnational congruencies, although the length of this significant boundary is dwarfed by the extent of Galicia’s maritime perimeter, for the territory juts out into the Atlantic Ocean at Europe’s westernmost point.