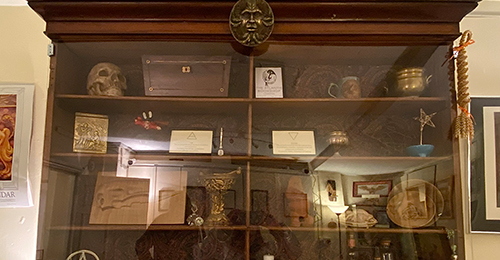 ENDLESS ALCHEMY AT THE ATLANTIS

This year, the Atlantis Bookshop, one of London’s oldest and most unusual specialty-retail outlets, which focuses on magic, esoterica, and the occult, is marking its 100th anniversary. From the British capital, brutjournal’s artist-correspondent Cathy Ward reports.

LONDON — The Atlantis Bookshop, which bills itself as the custodian and emblem of “the living history of magic,” was established in 1922 and may be seen as occupying a place on a historical time line between two of London’s major landmarks, in-between which it is geographically situated, too: the British Museum (founded in 1753) and Centre Point, the city’s first skyscraper, which was built in the early 1960s. The Atlantis Bookshop is located in the historic Bloomsbury Conservation Area of central London, an district that, for centuries, has attracted all sorts of odd-bod individuals.

Over the past century, the Atlantis Bookshop has welcomed through its doors many renowned occultists and generations of inquisitive explorers of the subjects its specialized range of books and related merchandise cover. Its centenary celebration began on March 20, this year’s spring equinox, with copious servings of champagne, fairy cakes, and a version of its excessively good “Cheese Selection,” a mainstay of the shop’s special events.