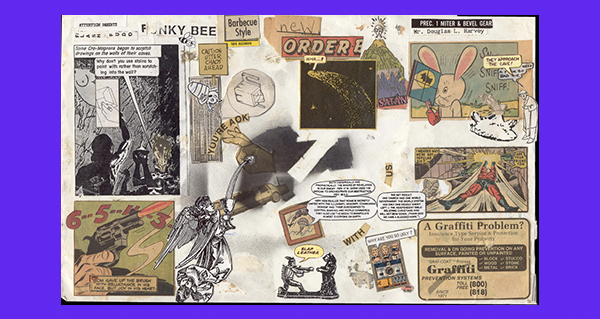 Based in Los Angeles, Doug Harvey recalls making his first collages when he was in kindergarten. A writer, curator, and visual artist, he says that the spirit of collage “informs my basic understanding of art, society, human consciousness, and the nature of reality.” Above: A work from Harvey’s ongoing “Flash Fudd” series. Photo courtesy of the artist
COLLAGE ART: DOUG HARVEY, FLOWING WITH THE “FLASH FUDD”

FOR THE L.A.-BASED ARTIST AND WRITER, APPROPRIATING AND RECOMPOSING FOUND MATERIAL OPENS THE DOOR TO RADICALLY NEW FORMS OF NARRATIVE

Based in Los Angeles, Doug Harvey is a well-known American arts writer, curator, and educator who is also an artist; over the years, he has explored the art of collage and incorporated its techniques and aesthetics deeply into his own creations.

For many years, Harvey served as the art critic for L.A. Weekly, a newspaper offering news and cultural reporting from non-mainstream points of view. He has curated countless exhibitions covering a wide range of subjects, including surveys of the work of various contemporary artists and other presentations that have examined such topics as psychedelic poster art, performance and experimental art forms, and sound art.

In his own art-making, Harvey has worked with a wide variety of materials in many different genres, including painting, installation, performance, film, and video. One of his most interesting projects has been a series of exhibitions of moldy, old, 35mm color slides that he found some time ago; the vacation scenes they depict became infiltrated and transformed in fascinating ways by mold-caused abstract passages.

Harvey’s simple act of proposing to look at such images in new ways, prompted by the damage that was done to those old color slides by mold, is rooted in aesthetic ideas that are not too far removed from those that inform and motivate collage-making.