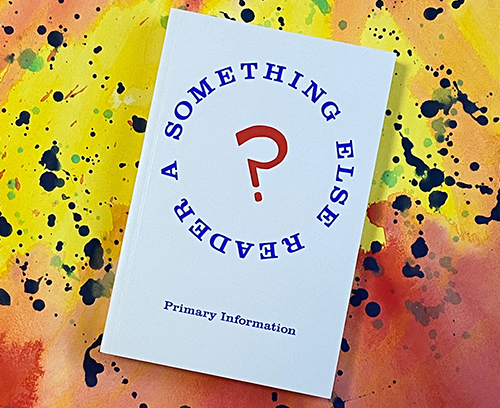 A Something Else Reader
Edited by Dick Higgins
Assembled by Alice Centamore
Published by Primary Information, Brooklyn, New York, 2022
ISBN 978-1-7377979-2-0

In its time, the New York-based Something Else Press was truly something else — a small press founded in 1963 by the artist, composer, poet, and art theorist Dick Higgins (1938-1998) with the aim of publishing the original, unusual work of artists and writers of the post-World War II era’s avant-garde.

Higgins ran the company almost right up until it folded in 1974. A co-founder of the international Fluxus community of avant-garde artists who experimented with chance-based, audience-participatory, performance-oriented art forms, Higgins coined the term “intermedia.” It referred to the Fluxus artists’ often undefinable, interdisciplinary practices.