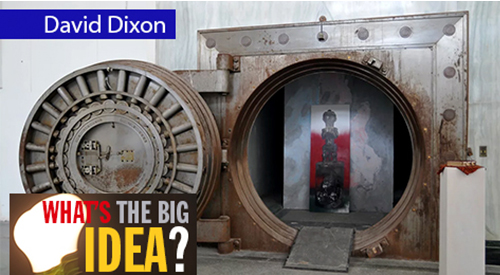 DAVID DIXON’S LATEST SITE-SPECIFIC ART PROJECT: YOU CAN BANK ON IT

More precisely, he borrowed the history-flavored spirit of a former bank building’s stately interior and used it as part of the raw material for one of his newest, site-specific art projects, which he realized earlier this summer in Beacon, New York, a small town on the west bank of the Hudson River, about 55 miles (88.5 kilometers) north of New York City.

In 2003, the Dia Art Foundation’s opening in Beacon of a renovated industrial building as a home for its collection of modern art dating back to the 1960s put the town on the map as a significant satellite of the New York City art world. Today, it boasts many commercial art galleries of its own.