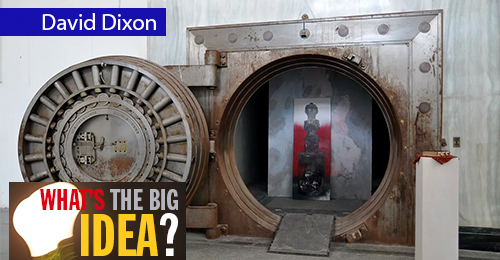 DAVID DIXON’S LATEST ART: YOU CAN BANK ON IT

More precisely, he borrowed the history-flavored spirit of a former bank building’s stately interior and used it as part of the raw material for one of his newest, site-specific art projects, which he realized earlier this summer in Beacon, New York, a small town on the west bank of the Hudson River, about 55 miles (88.5 kilometers) north of New York City.

In 2003, the Dia Art Foundation’s opening in Beacon of a renovated industrial building as a home for its collection of modern art dating back to the 1960s put the town on the map as a significant satellite of the New York City art world. Today, it boasts many commercial art galleries of its own.

Dixon is the founder and director of Cathouse Proper, a gallery in Brooklyn that is an outgrowth of his earlier Cathouse FUNeral gallery. About his venues’ curious names: Cathouse FUNeral was located in a section of a building that was primarily occupied by a funeral parlor; Dixon often altered the interior layout of that gallery when mounting new exhibitions. For a while, he operated two separate spaces, the second of which became known as “Cathouse Proper.” This is the artist and art dealer’s main gallery space today (at 524 Court Street in Brooklyn’s Carroll Gardens neighborhood).