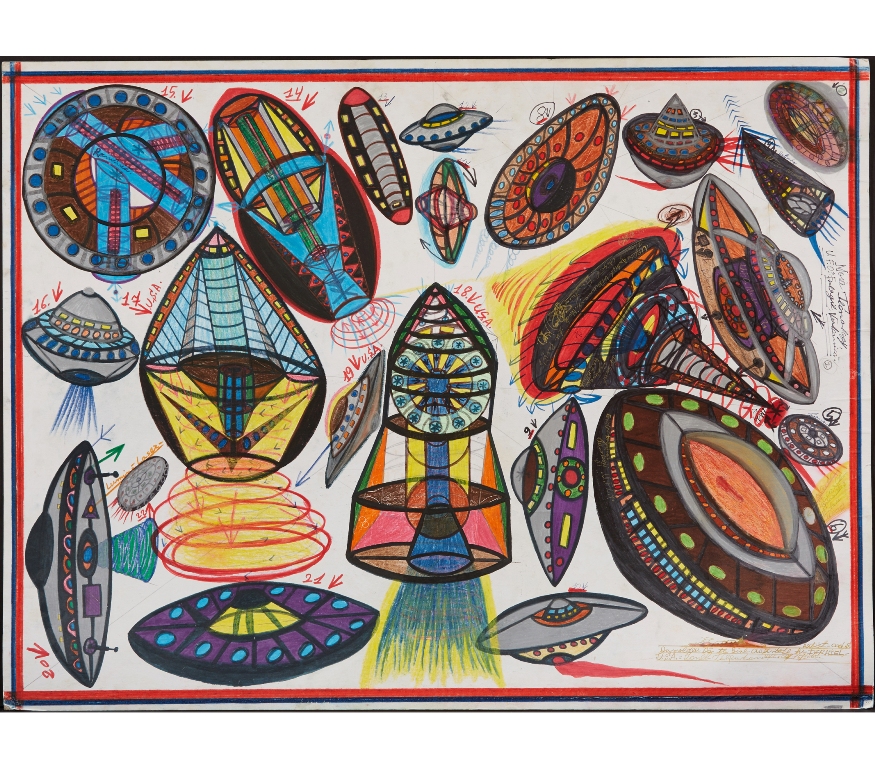 BEAM US UP! ABDUCT US! TAKE US TO THE FUTURE

Continued from THE BIG PAGE…

In another report from England, we’ll look behind the scenes at London’s College of Psychic Studies, an unusual institution whose slogan is, “Exploring consciousness since 1884.” This home to a collection of so-called mediumistic art and other hard-to-classify art forms whose production is linked to the experience of trances or of heightened awareness was recently renovated. Its custodians have found all sorts of treasures in their archives. We’ll look at what is being dusted off and attractively exhibited, with commentary from well-informed sources.

After more than a century of development, as far as modes of art-making are concerned, abstract art has become an international lingua franca. In capable hands, it’s still a powerful expressive language — and still a revolutionary one, too. brutjournal will look regularly at many different facets of abstract art, which remains the most unclassifiable of hard-to-categorize artistic expressions. At its best, it can be as visually dazzling as it is spiritually uplifting. What explains its potency, its mystery, its enduring allure?

Also to come: We’ll speak with older and younger artists and experts who make or who focus on what was originally known, decades ago, as “idea art” — conceptual art, that is, cooked up by those explorers of the ineffable for whom the material art object don’t mean a thing if it ain’t got a certain kind of intellectual swing.

Our sources will weigh in on that urgent question of our times: Is there still an avant-garde and, if so, what does it look like, what are its concerns, and what might its role be today in the broader context of the teaching, making, presentation, and selling of art? We’ll also ask them to chew on what brutjournal is calling “the avant-avant-garde.” Huh? Taking a cue from the Fluxus artists of decades ago, we’re interested in how attitudes about and the appreciation of everyday movements and actions may be seen and appreciated as artistic in their own right.

We’ll have many exclusive excerpts to come from new and notable books exploring the subjects that seize our attention, including for-brutjournal-only, first-time translations into English of new research and other writings by leading artists, art historians, curators, and other fresh thinkers who are on the same page — literally — with what we’re all about.

Video, film, photography, music, dance, design, architecture — we’re interested in whatever is radically new in established creative fields and in those that don’t yet have a name. Did someone say, “cross-disciplinary”? We’ll take a big serving of that, please. We’re as interested in the far-out fashion that’s coming out of the world’s most interesting art schools as we are in the work of someone like the older American painter Stephanie Brody-Lederman, whose oeuvre we’ll examine. She is an artist who has long charted and explored her own path, painting in and with the ether, making fleeting emotional and psychological states the subjects of her art.

Our editorial team includes contributors based in the U.S.A., Europe, Japan, Mexico, and other parts of the world, and it will grow as the magazine evolves. Please take a look at the “ABOUT brutjournal” page for Founder and Editor in Chief Edward M. Gómez’s description of the themes and interests, and of the ethos and ambition of this scrappy new magazine. Do consider subscribing. Together, let’s build an engaged and engaging community of readers here at brutjournal, where we’ll welcome the new and unusual — and revel in what’s unique, puzzling, head-scratchingly uncommon, daringly different, and out of this world. Hey there, Mr. Talpazan, beam us up!