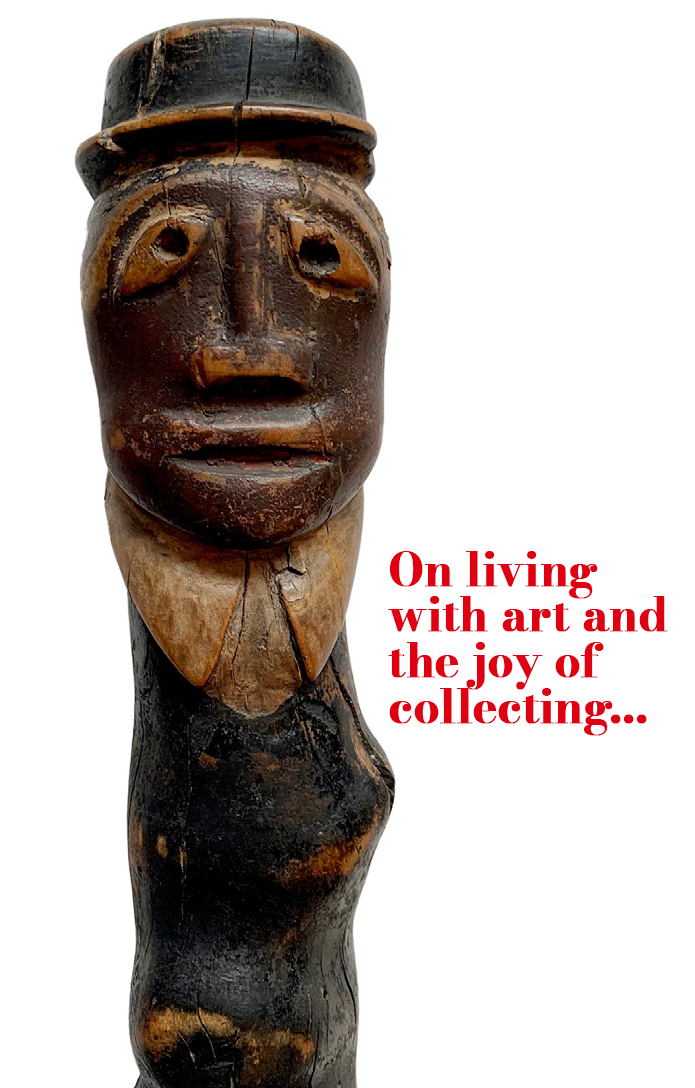 COLLECTOR-CURATOR JOHN FOSTER SHARES A FAVORITE TREASURE: A RARE, AFRICAN AMERICAN CARVED CANE
Over the years, the graphic designer John Foster and his late wife, Teenuh Foster, of St. Louis, Missouri, assembled notable collections of outsider art, folk art, and vernacular photography. Through a lively Instagram account (look for “@accidentalmystery”), John routinely shares photos and descriptions of favorite pieces from his holdings, as well as wide-ranging observations about art, connoisseurship, and aesthetics. Here, he shares a gem from his trove with brutjournal.

A POWERFULLY EXPRESSIVE WORK OF CRAFTSMANSHIP — AND MYSTERY

New to my collection is this carved and painted folk-art cane, which is believed to have been made by an African American carver somewhere in the American South and to date from around 1880. Measuring 37 inches in height and 2.5 inches in diameter, this rare object has the weight and the feel in the hand of a baseball bat.

Its carved head is that of an African American man with a cap and a collar; with its pronounced features, it seems likely that it is a portrait of someone who was known to its maker (possibly another African American man). Even after almost a century and a half, the wood retains most of its original polychrome, with some age splits scattered throughout the body of the piece.

Recently, I purchased this cane from the antiques dealer Steven S. Powers, whose gallery in New York specializes in American folk art. Its provenance included periods of time in the possession of such well-known collectors as the late Larry Dumont and, before him, Peter Brams.

There is a power to this object. Its knotty form and substantial weight make me think that it could have served two purposes — that of a walking support and also that of a deterrent from harm. Holding this cane feels like holding history itself.