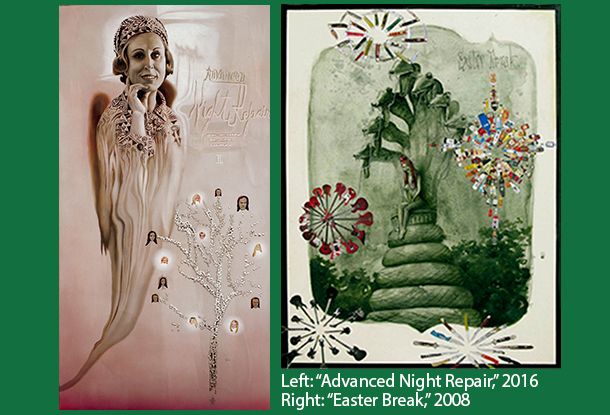 The artist Georganne Deen lives and works in Joshua Tree, California, and has long used collage as a way to escape the dictates of her own hand when making paintings or work in other genres — “when my own style gets in the way,” as she says. Her work is shot through with a sense of psychic vibes and suspended time. Photos courtesy of the artist
COLLAGE’S MYSTERIOUS REALM: GEORGANNE DEEN

RUMBLINGS FROM THE REAL WORLD INFORM AN ARTIST’S STIRRING IMAGES

Georganne Deen is one of those artists who seem to conjure up potent images from what is familiar and otherworldly at the same time. Her paintings and mixed-media works peel back surface layers of what viewers might think they know about such recognizable subjects as faces, plants, or animals to suggest new ways of looking at and thinking about them, especially as she anthropomorphizes certain forms — eyeballs seem to pop up everywhere — and whips up mysterious atmospheres that are as seductive as they are strange. Sometimes her materials are, too; into her mixed-media works she has collaged such items as peppercorns and seaweed.