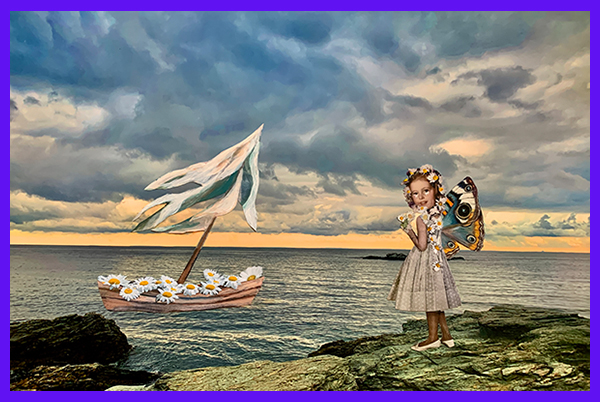 The artist Marnie Weber regards collage-making as a creative playground and is interested in the emotionally communicative power of this kind of art. Above: “Arrival of the Daisies,” 2022, paper collage, 13 x 19 inches. Photo courtesy of the artist and Simon Lee Gallery
COLLAGE ART: MARNIE WEBER’S “STORYBOARDS FOR THE SUBCONSCIOUS”

FOR THE MULTIMEDIA ARTIST, THIS GENRE TAPS INTO “OUR INNERMOST THOUGHTS, PASSIONS, AND MUSINGS”

Marnie Weber was born and brought up in rural Connecticut, where her family lived in an old house surrounded by woods in which she could play and, as she recalls today, in which her imagination could also run free. Throughout her art-making career, she has unabashedly made storytelling a central part of all of her work in various genres, employing an array of materials and techniques.

Art has always been front and center in her life; as she recently told brutjournal, she grew up surrounded by a deep, abiding appreciation of art and artistic expression, which laid the groundwork for what would later become her life’s work.

Weber recalled, “My father was an art historian who specialized in ancient Chinese bronzes.” Given that her family headed to Asia when young Marnie was ten years old so that her father could pursue his research, she grew up in a home in which, as she noted, “My parents encouraged me to be an artist, as they held artists in reverence, with deep respect for art.” The Webers spent time living in Taiwan and Hawaii before later settling in California.