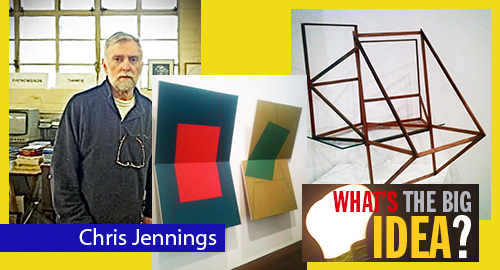 by Edward M. Gómez, in dialogue with Chris Jennings;
photos in the box above by Cathy Ward

The London-based artist Chris Jennings’ art-making approach and outlook are deeply rooted in painting, drawing, and philosophy, a perfect foundation and jumping-off point for the exploration of certain conceptual-art modes of thinking he has pursued as his career has evolved.

Jennings was born in 1942 in Fulmer, a village in the county of Buckinghamshire, in southeastern England, near London. Recently, he told brutjournal, “During World War II, I was evacuated to Sussex [a coastal county farther to the south]. I grew up in Sussex until 1947, after which we moved to Mill Hill in London.” Although no one in his family was directly involved in or interested in art, by the time he was ten years old, young Chris, whose favorite subjects were art, music, and sports, had his eyes on art school.