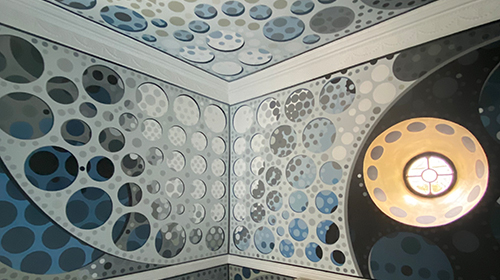 In the far north of England, near the border with Scotland, the artist-designer Tod Hanson is transforming his Georgian-era house into a fantasy showcase, one room and one big, bold idea at a time. Photo by Cathy Ward
TOD HANSON: A HOUSE, A FANTASY, ANOTHER WORLD

IN THE FAR NORTH OF ENGLAND, AN ARTIST CREATES A LIVING SPACE “OF ENLIGHTENMENT”

Recently, Cathy Ward, brutjournal’s London-based artist-correspondent, traveled to the town of Berwick-upon-Tweed, in Northumberland, in the far northeastern corner of England. Situated just about 2.5 miles (roughly four kilometers) from the border with Scotland, it is the northernmost municipality in England. There, she visited the home of the artist Tod Hanson, who has been transforming the historic building in which he lives in a unique and dazzling manner, imbuing it with color, dynamic interior designs, and inestimable soul.


BERWICK-UPON-TWEED, ENGLAND — About his stunning, room-by-room transformation of the Waxwing Building, his 18th-century house, the artist Tod Hanson wrote in a note:

“The aim of the Waxwing building is to be a kind of three-dimensional diagram of the Earth to the Sun. A sequential stratified experience, floor by floor and room by room, [in which] each space changes in color and geometric pattern, [and] each chamber is foregrounded by the previous [one] to make an unfolding drama. It's a crude, inaccurate stack of planetary spheres/layers, emerging through the crust to biosphere, ozone up to space, and the stars. A baroque architectural thing, where, through trompe-l’oeil, surfaces are rendered semi-transparent, like layered frames or mesh. The house becomes the synthetic world we've built, a cronky tower, [a] civilization structure, a technological assemblage that sails its orbit, too close to the Sun.”