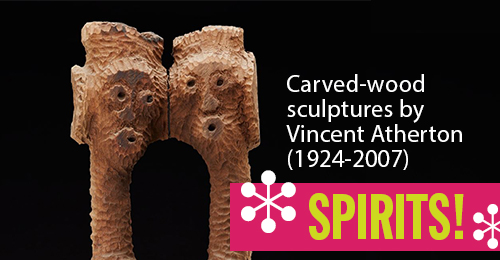 CAPTURING THE ANCIENT SPIRIT IN ART AND PHOTOS

By Edward M. Gómez, in conversation with Randall Morris

In New York, the husband-and-wife team of Shari Cavin and Randall Morris has been researching, collecting, exhibiting, and selling art for many decades. Cavin and Morris opened their first gallery in Manhattan’s TriBeCa district in 1985, by which time they had developed strong, shared interests in art brut, outsider art, and what used to be called “ethnic art” or “tribal art” (to refer, in a general way, to non-Western art forms); later, this category began to be referred to as “indigenous art.”

Today, Cavin-Morris Gallery, which is located in Manhattan’s Chelsea neighborhood, no longer shows “ethnic,” “tribal,” or “ethnographic” art, which Cavin and Morris had been collecting themselves since 1980, but Morris noted that he is still privately handling primarily ceremonial masks from the Americas and Asia.

In keeping with this month’s theme of the spiritual in art, the spirit world, and spirituality in general, as it is expressed by or through works of art, from Cavin-Morris Gallery, we borrowed a trio of carved-wood sculptures made by the late Vincent Atherton (1924-2007), a self-taught Jamaican artist. Atherton worked as a groundskeeper at an eco-resort in the parish of St. Mary, where he lived, in the northeastern corner of Jamaica. On his own property, he had a shack in which he worked on his carvings.

Atherton produced axe handles and vases before beginning to develop his own figures, amulets, and staffs. Like the creations of many self-taught artisans and carvers in Jamaica, Atherton’s reflect influences from the island’s ancient, native Taino people, as well as those of his African ancestors who had been transported to the Caribbean during the long period of the slave trade in early colonial times.

As notes about Atherton’s work published by the National Gallery of Jamaica, the island country’s respected, principal art institution, point out, the artist himself regarded many of his carved-wood sculptures as “possessing great spiritual power and influence for protecting and guarding[,] or to pacify spiritual forces.”

The three Atherton sculptures we borrowed appear here in an all-new series of photographs shot by brutjournal’s visual director, Bill Westmoreland, outdoors in a natural setting in rural Pennsylvania. Bill also shot them against a sheet of earthy, sienna-colored background paper with which he was eager to experiment. His goal with this assignment: to capture the ineffable spirit or aura that Atherton’s carvings both embody and exude.

In our recent interview, Morris recalled, “I first saw Vincent Atherton’s work in the late 1990s in Jamaica in the collection of Wayne and Myrene Cox, and then in situ in the bongo yard of his carver son Errol Lloyd ‘Powah’ Atherton. There was a direct connection between that space and the spirit yards [of African-American self-taught artists that can be found] in the United States. Vincent and Errol were both healers and spiritual men.”

Morris noted that, “By that time, at Cavin-Morris, we had been showing Jamaican indigenous art for many years, and it was the subject of Redemption Songs: The Self-Taught Artists of Jamaica, an exhibition I organized, which was presented at the Diggs Gallery at Winston-Salem State University in North Carolina in 1997. In the gallery, we had been showing works made by artists in the pantheon of what had become known as the ‘Jamaican Intuitives,’ including, among others, Ras Dizzy, Everald Brown, Errol McKenzie, Elijah, Evadny Cruickshank, Leonard Daley, Woody Joseph, John Dunkley, Reginald English, Woody Joseph, Kapo, Sidney McClaren, Sylvester Stevens, Sylvester Woods, Kingsley Thomas, Doc Wiliamson.”

Remembering his first viewing of Vincent Atherton’s carved-wood objects, Morris said, “When I saw his work, I knew he was not only important but also a major culture bearer for his people, as was his son. I was thrilled to be able to see his work there, where it had been made, but most importantly, I was honored by the experience, too. Atherton’s works will be included in an exhibition I’m curating on the subject of black Atlantic art, which will open at Halle St. Pierre, in Paris, in 2024.”

As a collector and art dealer, Morris tends to dig deeply into the histories of the objects and artworks he handles and gathers. When it comes to traditional art forms produced by African artists and artisans, and, by extension, those that have been created by their descendants in a diaspora that has spread through many parts of the Americas, Morris points to animist spiritual belief systems that have influenced and informed so many of their creations from generation to generation.

He notes that animistic beliefs hold that “there is a soul in all living and inanimate things in nature,” and also that “this is part of the language of cultural resistance African-Atlantic peoples have long used to communicate with the universe and with each other in order to maintain their integrity as a people.”

Morris describes Vincent Atherton’s works as objects that are meant “to ward off evil, or to serve as healing balms,” and that they may also be regarded as “visual prayers.”

He observed, “When I’m in the presence of such works, my spine tingles, and reality seems to expand. Communication expands empathically. I’ve had the same feeling when examining similar works in Haiti or Mexico. In the presence of such powerful creations, I’m aware that I’m there always as a guest.”

Photographer Bill Westmoreland was deeply moved by his encounter with Atherton’s sculptures. He said, “Just like the cows I recently photographed out here in the countryside, these objects have their own expressions. Cows have little pieces of grass sticking out of their mouths, which give them almost a human touch. As for the Atherton sculptures, they aren’t just carved faces. I sensed that they actually were connecting with me, for Atherton carved more than faces. He carved expressions.”