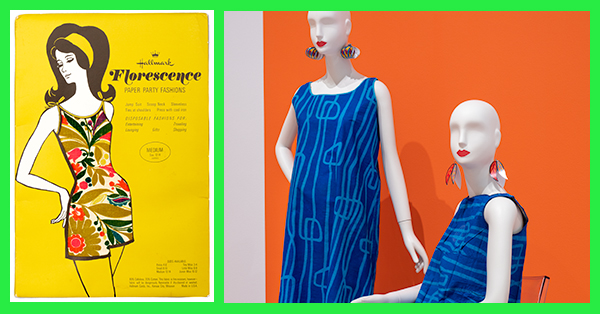 BY THE TIME WE GET TO PHOENIX, WE’LL BE DITCHING OUR JEANS AND CHANGING INTO PAPER CLOTHES

Generation Paper: Fast Fashion of the 1960s
Exhibition on view at the Phoenix Art Museum, Phoenix, Arizona;
now on view, through July 17, 2022

In the United States in the mid-1960s, the Scott Paper Company was selling toilet paper and dinner napkins. In a move that feels redolent of today’s online, viral marketing campaigns, the company, devising an innovative strategy to promote its new Dura-Weave material, which was composed of 93 percent paper-napkin stock and seven percent rayon scrim, used it to create two plain shift dresses, each of which was priced at $1.25 (or about $11.60 today, allowing for inflation).

But Scott, which had hoped to use the dresses as a playful marketing ploy for its familiar household products, inadvertently sparked a new-fashion sensation. In just eight months, the company sold 500,000 units of its unconventional paper dresses, which it offered in a black-and-white Pop Art design and a red bandana print.

Other companies, like Mars of Asheville, quickly hopped on the trend, and by the end of 1966, nationwide sales of paper clothes had reached almost $3.5 million. Suddenly, paper garments were everywhere, with disposable dresses, bikinis, raincoats, jumpsuits, and hats filling boutiques and department stores — and, ultimately, the closets of “fashion-forward” consumers — across the U.S.