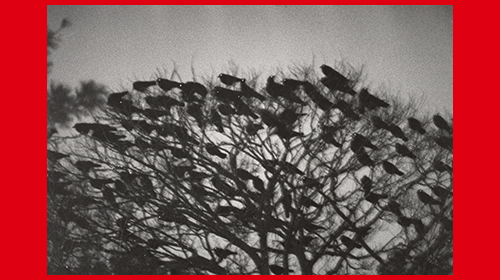 Masahisa Fukase, Ishikawamon, Kanazawa, 1977. Gelatin silver print. Center for Creative Photography, University of Arizona. Purchase, with matching funds, from Hitachi America, Ltd. ©Masahisa Fukase; courtesy Robert Mann Gallery. This photograph is currently on view in the exhibition Farewell Photography: The Hitachi Collection of Postwar Japanese Photographs, 1961-1989 at the Phoenix Art Museum (through June 26, 2022).
BY THE TIME WE GET TO PHOENIX, THEY’LL BE SHOWING MODERN JAPANESE PHOTOGRAPHY

The first wave of experimental photography that emerged in Japan in the 1960s didn’t just move away from realism; it also questioned its validity. The act of kiroku (記録, recording) had long been prized in Japan’s photographic tradition, and, for decades, the documentary nature of photojournalism had dominated the Japanese visual landscape.

But for the photographic medium’s new vanguards, recording what was going on in front of them meant something more — and something radically different — than merely producing crisp, clear images or legible samples of visual information. Realism, they found, was limiting; it could not fully capture their experience of the visible world. So they created a new style — are-bure-boke, which translates as “grainy, blurry, and out-of-focus.”

Now, Farewell Photography: The Hitachi Collection of Postwar Japanese Photographs, 1961-1989, an exhibition on view at the Phoenix Art Museum through June 26, brings to light the dynamic approach certain artists in Japan took to their work in the latter decades of the modernist era. The exhibition, which has been organized jointly with the Center for Creative Photography at the University of Arizona at Tucson, features 87 prints by 19 Japanese photographers.