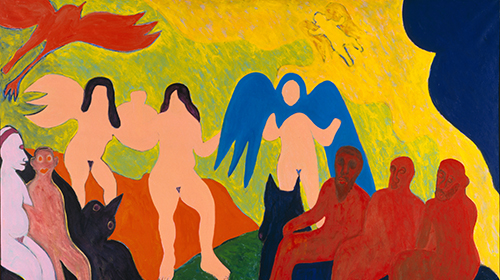 BOB THOMPSON: A PAINTER WHO SUBVERTED THE CANON

Organized by the Colby College Museum in Waterville, Maine, the retrospective exhibition Bob Thompson: This House in Mine is now marking the end of a national tour with a final showing at the Hammer Museum at UCLA in Los Angeles. Bringing together 50 paintings by its subject, a black American painter who enjoyed a short but notable career in late 1950s and the 1960s, the exhibition draws upon more than 40 public and private collections. (The artist Alex Katz and his foundation donated five paintings to the Colby, which provided an impetus for the making of this informative exhibition).

This House is Mine is the first retrospective of Thompson’s work to be presented in nearly 25 years. Thelma Golden, who now serves as the director of the Studio Museum in Harlem, curated the last major Thompson survey, which was shown at the Whitney Museum of American Art in New York in 1998.