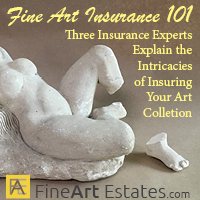 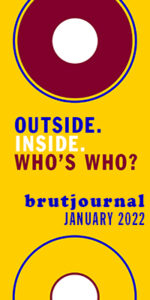 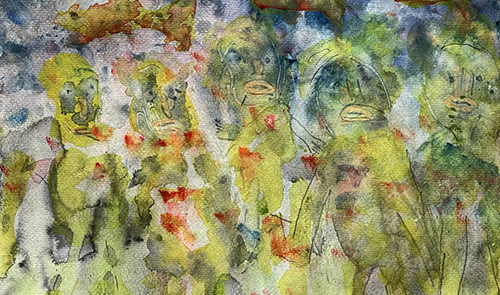 Steven Hirsch, detail from the painting “20,000 Leagues on the Sea,” undated, watercolor and pencil on paper, 12 x 9 inches (30.5 x 22.9 centimeters). Photo courtesy of the artist
FROM CAMERA TO PAINTBRUSH: MAKING PICTURES WITH STEVEN HIRSCH

In the lead-up to the 2022 Outsider Art Fair, which will take place in New York from March 3 through March 6, in this issue, we’re looking at the work and life experiences of a few artists — Dan Knight in London, Issei Nishimura in Nagoya, Japan, and Steven Hirsch in New York — who find themselves, either by choice or by the force of circumstances, somewhere on the margins of mainstream society and culture, or not closely connected to the infrastructure of the mainstream art establishment.

(See brutjournal London correspondent Cathy Ward’s report about and interview with Knight on this issue’s HOME PAGE, and my own article, coming soon, about Nishimura. It will appear on the BIG PAGE.)

In fact, in practical terms, just how much of an outsider each of these artists might be vis-à-vis the various poles of the so-called mainstream may well depend not so much on how his status is assessed and labeled by taste-makers and influential voices in that mainstream — by those on the “inside,” that is — but rather by how each one of them regards his own position in relation to that status-determining system.

The use of the “outsider” label should have no judgmental connotation when used in reference to their respective bodies of work. It may serve as a useful tag to help viewers orient these artists’ creations in relation to those of others who may be academically trained or not, but it need not become or be seen as a taxonomic straitjacket.