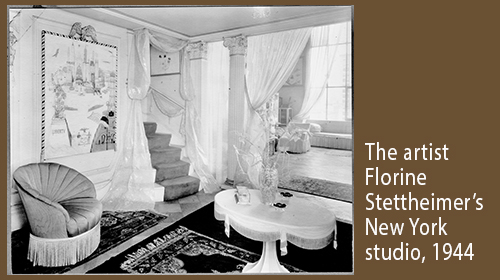 Peter A. Juley & Sons, “Studio Staircase, Stettheimer’s Studio at the Beaux-Arts Building,” 1944, from the Rare Book and Manuscript Library, Columbia University in the City of New York. Photo from the new book Florine Stettheimer: A Biography, by Barbara Bloemink (Hirmer/University Chicago Press). Photo courtesy of the publisher
FINDING FLORINE STETTHEIMER: THE NEW BIO-BOOK

“From an early age, Florine reveled in whatever was new,” writes the art historian and curator Barbara Bloemink, the world’s leading authority on the American artist Florine Stettheimer (1871-1944), in her new book Florine Stettheimer: a Biography (Hirmer/University Chicago Press). It turns out to be the most essential point to keep in mind while reading her impressive account of the life and career of a truly singular and still not very well-known modernist pioneer.

Stettheimer’s paintings spoke the language of newness. Inspired by the Russian impresario Sergei Diaghilev’s sensational Ballets Russes, an itinerant modern-dance company that toured Europe and the Americas, representing the very cutting edge of the vanguard during the early 20th century, Stettheimer developed what Bloemink describes as an exuberant, deeply feminine painting style that sought to “excite, provoke, inspire, and unlock experience,” as Diaghilev said. As a result, Bloemink writes, every one of Stettheimer’s mature paintings “has a familial, political, personal, or event-related subject.”