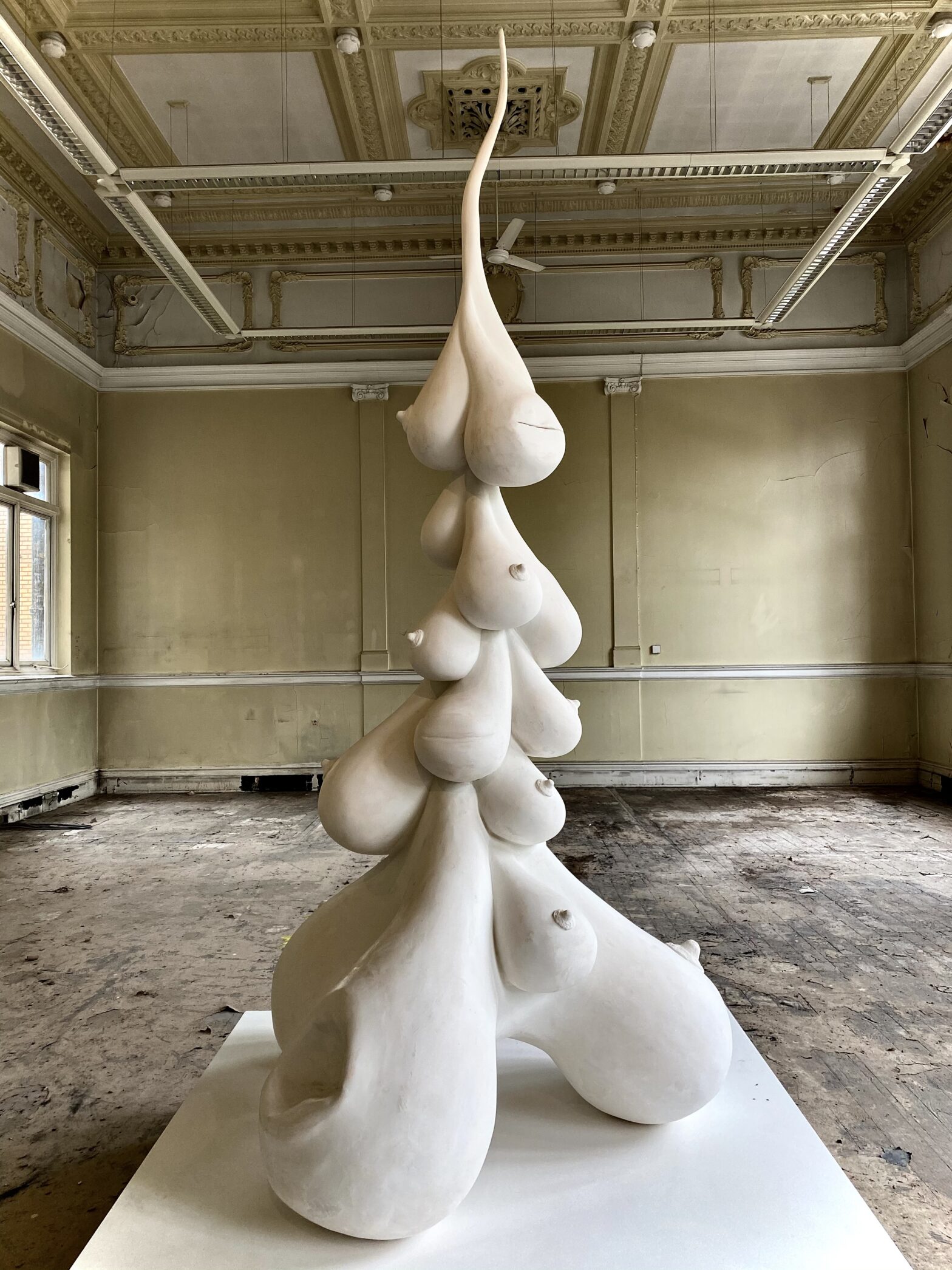 A close-up of Charlotte Colbert’s “Mastectomy Mameria” in the recent Art in the Age of Now exhibition, which was presented in an old, long-abandoned city building in London.
“ART IN THE AGE OF NOW”: ART POINTING A WAY FORWARD, OUT OF THE PANDEMIC
Recently, in London, an exhibition popped up at Fulham Town Hall, a Victorian-era, former city-government building in the western part of the city that had been unused for a decade. There, Art in the Age of Now, a presentation of contemporary art, served as a reminder of how vital and stimulating the presence of art in public spaces can be. In a world of corporate-controlled everything and unimaginative politicians who routinely ignore the well-being of communities at all levels of society, brutjournal believes that, at this point in the 21st century, building and nurturing communities is not something old-fashioned or passé. In fact, these pursuits have become radical acts, and art and artists have a lot contribute to them. Our London artist-correspondent brought this point of view to her viewing of Art in the Age of Now, where she was especially struck by two artists’ works.

LONDON — Lockdown has had its plus sides.

Having been handed keys to a Grade II-listed, former town hall, which would serve as the venue for Art in the Age of Now, a large exhibition featuring some 100 artists’ works, curator Ben Moore was allowed to gradually install a vast assortment of art over a considerable period of time, including many sculptures and assemblages. Although the exhibition recently closed, on June 20, it generated plenty of excitement and suggested that, maybe, at last, London’s artistic community could begin re-emerging following a long, anxiety-filled period of pandemic-imposed confinement.

Note to non-British readers: In the United Kingdom, Grade II buildings are those that have been designated by government agencies as historically or architecturally significant and worthy of preservation.

For Moore, as a curator, the opportunity to have time in which to think about and adapt such a large exhibition to a particular building’s unique interior was a rare one. Visitors to Art in the Age of Now could certainly feel how some of the works on display seemed to have grown right into the grand interiors they occupied, and in many spaces within the old town hall, they could get a sense of how it must have felt back in the 1980s, when squatting in such buildings became the norm for many of us artists.

Now here we are, emerging from pandemic-caused lockdown, and the squatters are back. Perhaps it was a good idea to show art in such an alternative way, one that was more common in the past, before certain laws were enacted, and local-government councils did not have the necessary funds to do up old buildings (which partly explains why this historic structure had been locked up and left to decompose over the past decade).

This sense of encountering art in a most unexpected venue could be felt particularly strongly in the painted interventions on the old building’s basement cell walls, which had been made by many street artists. Overall, the exhibition felt like a journey through the creative territory in which predominantly young artists are working today, but the creations of veteran, established names were also on view, such as those of the design genius Conrad Shawcross and, on the opposite end of the aesthetic spectrum, those of Joe Rush, the founder, in the 1980s, of Mutoid Waste Company, a street-theater and performing-arts group.

Fulham Town Hall, which was completed in 1890, is a rare beauty. Sadly, most buildings of its grand age have had their period interiors gutted, and only their façades remain. But this time, perhaps for a final moment before inevitable redevelopment begins, visitors to the exhibition could explore a vast warren of rooms revealing their aged character in peeling paint and savor the exceptional craftsmanship of their Art Nouveau and Art Deco fittings; ornamental, mosaic flooring; wall tiles; and elaborate, stained-glass windows. The concentric rows of seats in the Courtroom are solidly built of oak — real works of art in themselves.

Hopefully much of this building’s splendor will be sympathetically restored for the community and public to enjoy. But the entire experience of this recent exhibition felt significant to me, as much for the building in which it was presented as for the art it displayed.

The site offered a hint of a look back to a time before two world wars irrevocably changed British society. Fulham Town Hall came into existence at the end of an era, before war radically changed the world. Conversely, this exhibition emerged in unusual circumstances prompted by a worldwide pandemic. With such ideas in mind, numerous works on view in Art in the Age of Now fittingly addressed such themes as war, displacement, and the human condition.

The French-British artist Charlotte Colbert, who is known for her work as a filmmaker (co-screenwriter, with Bruce Goodison, Leave to Remain, 2013; producer, Dalí Land, 2021) presented a surrealist mountain piled high with various-sized female breasts, from large and pendulous protuberances at its base to smaller, pert orbs at the top, some perfect, and others dented or lacking nipples. This strange mound of breasts brought to mind industrialization’s growth in recent decades and the production of celluloid breast implants for the plastic-surgery industry.

Piled up in layers and resembling kebab meat on a big skewer, Colbert’s disembodied breasts, with a whiff of Salvador Dalí and maybe of sexual fetish, too, seemed to be waiting to be surgically inserted. Colbert’s sculpture called attention to society’s fascination with women’s breasts as both sexually alluring playthings and also to their function as life-nurturing body organs.

Inevitably, it also evoked the specter of breast cancer and so-called breast-reconstruction surgery. Visible at the bottom of some of the largest mammary forms in Colbert’s work were irregular marks related to the surgical removal of imaginary tumors — reminders of how illness can affect society’s idealized, aestheticized notion of perfect, pretty, desirable breasts.

In the Ballroom: Joe Rush’s “Theatre of Waste”

In the Joe Rush’s sprawling installations made from his signature raw material — industrial, metal waste — invaded several large rooms of the former town hall. Most of their components had come from engines or military-surplus equipment. Swags of theater curtains framed the displays of the artist’s three-dimensional compositions in metal.

As the originator of the Mutoid Waste Company in the 1980s, Rush heralded the cult of the “crusties,” a contemporary urban tribe whose members are known for their combative, post-apocalyptic, punk-commune aesthetic and fatigue-wearing, grow-bag look. (“Grow bags” are plastic sacks containing soil or compost; they are used for growing plants.)

Inspired by the 1979 movie Mad Max, Mutoid’s large-scale, welded sculptures, its performances, and its illegal warehouse rave parties became influential on London’s underground scene a few decades ago. One time, on the site of a squatters’ compound near King’s Cross Station, you had to swing like Tarzan on a rope over a kind of greasy, black-flooded lake to reach the music action.

Today, many years on from that raucous past, Rush’s work cannot convey what that era’s mayhem and exhilarating spirit felt like. In this exhibition, it had lost its brutal edge, and some of Rush’s creations seemed plain silly, but to his credit, he has been responsible for some incredible engineering spectacles in which his art has been prominently featured, including those that he has presented at many Glastonbury music festivals over the years.

Cathy Ward is British artist based in London. In late 2019, Liberty Realm, a monograph about her work, was published in the United Kingdom by Strange Attractor. The book is now being distributed in the U.S.A. by The MIT Press. It is available in the U.K., continental Europe, Japan, and the U.S.A. in physical bookstores and from online retailers.