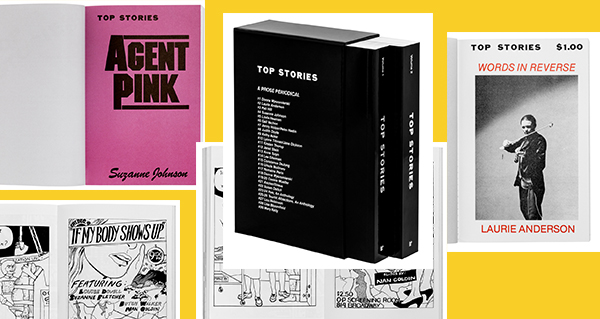 What can a little book do?

That’s the question that framed Anne Turyn’s approach to Top Stories, the prose periodical she produced from 1978 through 1991. In 2020, Turyn told Know Wave, a London-based community platform and production house that put together an oral history of the publication, “I was really approaching Top Stories like, what can a little book do? What can words and pictures do? I like fiction that isn’t regular, you know what I mean?”

Through Top Stories, Turyn, a New York-based photographer whose work can be found in the collections, in New York, of the Whitney Museum of American Art, the Metropolitan Museum of Art, and the Museum of Modern Art, provided a catalyst for and captured for posterity a significant historical period’s experimental fiction produced by women writers.

In retrospect, the artists and writers who contributed to the periodical’s run of 29 issues represent a veritable who’s who of the avant-garde of the late 1970s and the 1980s, including, among others, Laurie Anderson, Lynne Tillman, Cookie Mueller, Mary Kelly, Constance DeJong, Jenny Holzer (in collaboration with Peter Nadin, a rare male contributor), and Kathy Acker. The work they offered Top Stories established bridges between visual art and fiction.