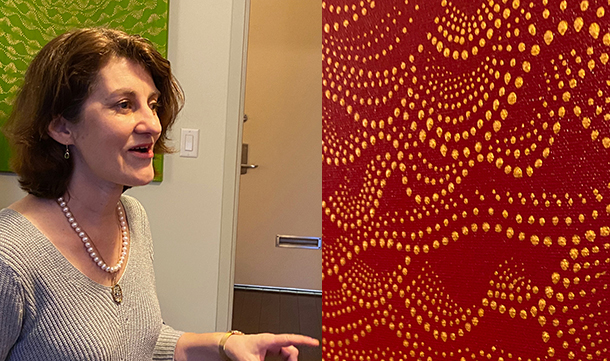 Ann Cecil-Sterman, a New York-based, Australian-born specialist in acupuncture, has developed a deep understanding of an ancient Chinese method of analyzing the information offered by multilayered readings of the human pulse. She has created a mode of abstract painting that gives visible form to her findings. Photos by Edward M. Gómez
ANN CECIL-STERMAN’S PAINTINGS: TAKING THE PULSE OF PSYCHIC CURRENTS IN VISIBLE, ABSTRACT FORM

OUT OF HER EXPERIENCE IN ACUPUNCTURE AND AN ANCIENT HEALING TECHNIQUE, AN ARTIST HAS EMERGED

NEW YORK — In a nondescript, old office building in downtown Manhattan that years ago was renovated to become a somewhat more contemporary-feeling building, Ann Cecil-Sterman keeps a modest, comfortable, unfussy, uncluttered workspace. There is nothing bright or flashy about its appearance or décor; its ambiance is that of an unexpectedly soothing, tranquil oasis in a normally very noisy city that, nowadays, looks and feels especially chaotic, dilapidated, and dispiriting. New York's antiquated subway system is filthy, run down, and dangerous; even more than usual, this metropolis has become marked by dramatic income disparities that have made it a playground for those with plenty of money in their pockets and a place of constant struggle for survival for those who don’t. And whether they’re rich, not-so-loaded, or poor, all New Yorkers took a wallop from the coronavirus pandemic, which left an already stressed out population feeling downright weary.

Born and brought up in Australia, Cecil-Sterman has lived and worked in the United States for many years. In New York, she studied what is known as advanced acupuncture and classical Chinese medicine with Dr. Jeffrey Yuen, a well-known specialist and educator in these fields who is also a Daoist priest; unlike so-called modern acupuncture, which focuses on 12 of the human body’s “channels,” through which “qi” (life energy or the life force) flows through the human body, advanced acupuncture addresses all 68 channels whose study and use date back many centuries. Cecil-Sterman has written the books The Art of Pulse Diagnosis and Advanced Acupuncture, A Clinic Manual, which have become widely consulted reference works.