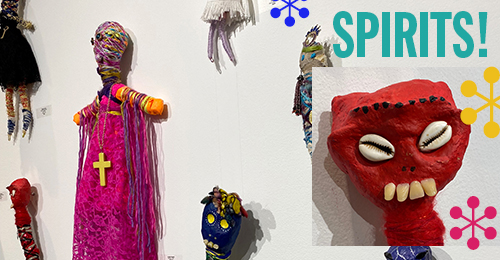 ANGELA ROGERS: FROM THE TAROT TO THE “POPPET”

At the 2022 Outsider Art Fair, which took place in New York earlier this year, at the beginning of March, the artist Angela Rogers showed a large group of three-dimensional, mixed-media figurines that were mounted on a wall in the booth of Fountain House Gallery.

With their spindly, outstretched arms; mermaid-like tails; heads sometimes bound up like stuffed sausages with colored thread; and painted-on, probing eyes or big peepers made of cowrie shells or other materials, Rogers’ strange little creatures appeared to be full of energy — and more than ready to jump off the wall, hightail it out of the art-fair site, and blend into the everyday bedlam of the city, with all sorts of potential mischief and magic in mind.