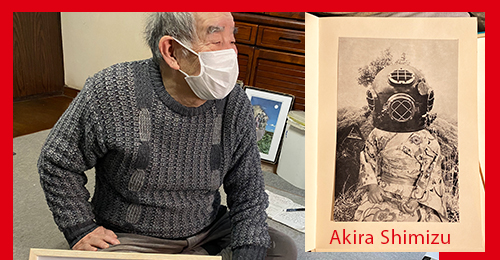 February 2022: The artist Akira Shimizu at his home in a small town in Saitama Prefecture, north of Tokyo, with some of his collage works from past decades. Photo by Edward M. Gómez
AKIRA SHIMIZU: MODERN MASTER OF COLLAGE

SAITAMA PREFECTURE, JAPAN — Born in 1938 in Toyama, a coastal city in the west-central part of Honshū, the Japanese archipelago’s main island, Akira Shimizu is an artist who has always cut a very individualistic path.

Unlike other Japanese modern artists of his generation who grew up during World War II and in the postwar period, and who developed their art and ideas during a period of reconstruction and rapid economic development, Shimizu never became a member of an artists’ dantai (association) or collective, or a participant in any movement or artistic-stylistic school. He was never associated with such postwar Japanese modern-art groups or movements as Gutai, Mono-ha, or Neo-Dada.