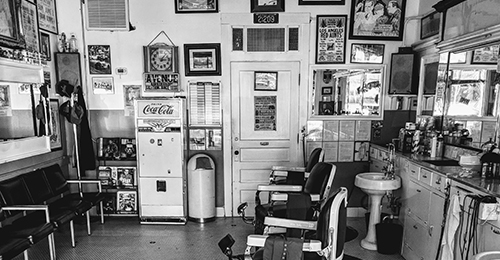 A LOOK INSIDE THE ORIGINAL “MAN CAVES”: MEN’S BARBERSHOPS

TRAVELING AROUND THE SOUTHERN U.S., THE PHOTOGRAPHER DAVID ENSMINGER CAPTURES THE SPIRIT OF A SPECIAL KIND OF GATHERING PLACE

David Ensminger is an instructor of English, the humanities, and folklore at Lee College in Baytown, Texas. His books include, among others, Visual Vitriol: The Street Art and Subcultures of the Punk and Hardcore Generation (University Press of Mississippi, 2011) and Mojo Hand: The Life and Music of Lightnin’ Hopkins (University of Texas Press, 2013).

From sea to shining sea, much of the United States has become an endless strip mall featuring the inescapable outposts of such emblems of national and global capitalism as McDonald’s, Starbucks, and Taco Bell. At the same time, though, on the dying main streets of some towns or tucked away in the urban-sprawl strip malls of many large American cities, an array of more modest businesses can also be found.

In contrast to the slick packaging of corporate-chain retail outlets, these smaller, independent establishments sometimes exude a less-is-more vibe. These storefront businesses include yoga studios, gift shops, home-décor stores, and, occasionally, cocktail bars in which bare, exposed interior walls are decorated with little more than neon beer-logo signs or nothing at all.