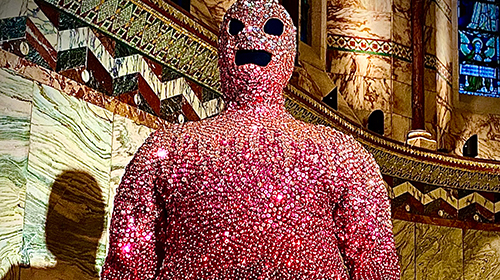 The exhibition Leigh Bowery: Tell Them I’ve Gone to Papua New Guinea is on view through February 6, 2022, at the Fitzrovia Chapel in central London. This homage presentation examines the late performance artist’s costumes, showcasing some of his iconic looks against the backdrop of the church’s gold mosaic ceiling and marble walls. Photo by Cathy Ward
IN LONDON, A GLITTERING HOMAGE TO LEIGH BOWERY

See the added interview with the designer David Holah below, following this main article. In it, Holah recalls his friendship with the late Leigh Bowery.

Leigh Bowery (1961-1994) was an Australian-born performance artist, London club-scene promoter, fashion designer, and friend, model, and muse of such artists as the British portraitist Lucian Freud, who famously painted the large man’s image numerous times. Although he died young, Bowery had a considerable influence on such artists and performers as Boy George; he became known for his bright makeup and costumes, and performances that were sometimes shocking.

In central London, Fitzrovia Chapel is a former branch of the Church of England. Now a secular space that is used for non-religious ceremonies and cultural events, the chapel is the only remaining part of the now-demolished Middlesex Hospital, the facility at which Bowery died from complications related to AIDS on December 31, 1994, at the age of 33.