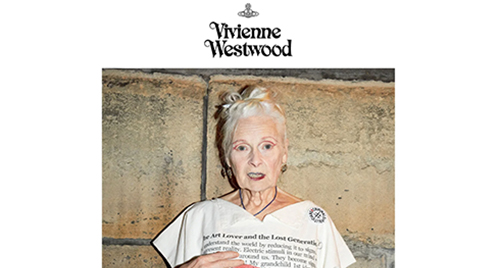 ROGER BURTON, A FASHION HISTORIAN-COLLECTOR AND THE FOUNDER-DIRECTOR OF LONDON’S HORSE HOSPITAL, AN INDEPENDENT ARTS CENTER, RECALLS THE DESIGNER AND ACTIVIST

Editor’s note: Normally, brutjournal is written and edited in standard American English, but here, we’ve left Roger Burton’s text in its original British English. A version of this obituary first appeared on the website of The Horse Hospital.

LONDON — The world has just lost one of the most remarkable, influential, and fearless women who ever lived, a woman who could truly say that she did it her way. Whether it was through her revolutionary clothing designs, or her confrontational slogans or politics, she was entirely committed to free speech, equality, and saving the planet right to the end, trail-blazing throughout her life with the spirit of a modern-day suffragette.

From the first time I saw her in the early Seventies, clanking down the King’s Road with that shock of cropped blonde hair, biker T-shirt, leather miniskirt, ripped tights, and Persian-lamb boots chained together, to the very last time I spoke to her about four years ago, when we were both cycling up the Mall, Vivienne was always unmistakable.

That glorious day, I spotted her way off in the distance looking like a very chic homeless person with ripped and faded clothes flapping in the wind. She had on one of those oversize, 1980s, silk-blouson jackets with a vivid Picasso print on it, bits of printed fabric wrapped around her body and head, gold Cupid-print stockings, red high-heel court shoes, and her then-black lips and signature red eyebrows — and she looked fucking incredible!

One time, Vivienne casually mentioned that she had been asked to give advice to the Duke of Edinburgh [the late Queen Elizabeth II’s husband, Prince Philip] at Clarence House about something she couldn’t really remember, but she wasted no time in inviting me to a lecture she was giving about the perils of fracking. It was a joyous, uplifting, and unforgettable encounter — and so typical of the woman we all loved and admired so much.

Vivienne always had an amazing enthusiasm for all things stylish and was obsessed with historical dress and detail. I remember only too well spending an entire day at her flat in Clapham in 1979 as she bombarded me with influences and ideas for her latest pirate-themed collection for the new World’s End shop I was about to design. Every surface of her tiny living room was piled high with historical reference books, art books, fashion magazines, records, and bin liners full of clothes.

Amidst it all, Vivienne talked infectiously about her influences as she constantly rifled through old books, showing me fabulous reference pictures of colonlized Native Americans at the turn of the century sporting top hats and frock coats decorated with feathers and war paint, and infamous 18th-century pirates wearing customized naval uniforms, alongside her passion for science fiction. I got a clear message that, with this new collection, she was going to create a world of style that would drag the past screaming into the future. Vivienne and [her creative and business partner,] Malcolm [McLaren,] had already thrown the rule book out of the window years ago and changed fashion forever, so nothing was going to stop her now.

When we were building the World’s End shop,* Vivienne would occasionally stop by on her bike, always dressed immaculately in one of her latest creations; even so, she was always very hands-on and never afraid to pick up a hammer or paintbrush. She was fascinated with the shop build being an organic process, always encouraging teamwork and lending great vision to the project. We would have lengthy discussions over where and how the clothes should be displayed, [noting] that key outfits [should] be displayed in a line, on metal scarecrows, like drunken sailors. She always maintained a strong belief that ideas should be shared and, in effect, a collaboration, with no one person receiving full credit for them. Vivienne would obsess about different paint finishes and, in particular, about the interior colour of the shop, which was repainted five times until we got the right, subtle shade of turquoise. Such was her attention to detail.

In 1993, I curated the Vive Le Punk exhibition at the Horse Hospital as a tribute to Vivienne and Malcolm’s collaboration throughout the 1970s. The fact that the exhibition reunited them again after 10 years to share memories even for just one hour made it all worthwhile, and the unique video footage with which we captured them remains a lasting legacy of their time together. I am proud of the fact that that exhibition also threw the rule book out of the window, and has remained the flag bearing ethos of the Horse Hospital program for the last 30 years.

There seems to be no end to the interest that those punk designs still generate and I am very fortunate in having a good representative collection of her original garments. Copies and fakes have always been rife, but to me one of Vivienne’s most endearing qualities is the fact that she always believed plagiarism was the sincerest form of flattery.

Vivienne was a true English eccentric who managed to inspire everyone with whom she came in contact. She proved over the years that her unconventional methods and maverick attitude are still the envy of the fashion intelligentsia. Through pure determination, this formidable woman consistently pushed world fashion to the limits. Her legacy will continue to [serve as] an inspiration to anyone [who] has even a remote interest in design.

I feel extremely honoured to have taken part in her remarkable journey.

* Editor’s note: Opened in 1979 and located at 430 King’s Road in London’s Chelsea district, World’s End was the last iteration of a series of clothing stores at that same address that Vivienne Westwood had created and operated along with her creative and business partner, the late Malcom McLaren (1946-2010).

McLaren and Westwood designed the World’s End shop with Burton; its construction was carried out by Burton, Jeremy Blackburn, and Tony Devers. Its design was meant to evoke the ambiance of a Dickensian old curiosity shop crossed with that of an 18th-century galleon.

To learn more about Vivienne Westwood’s career and The Vivienne Foundation, a nonprofit organization the late designer-activist set up, along with her sons and granddaughter, prior to her death, see the home page of her company’s website. The new foundation will aim to work with various NGOs on issues about which Westwood was deeply concerned, including international efforts to end wars, protect the natural environment and fight global climate change, support human rights, and combat inequities caused by capitalism.