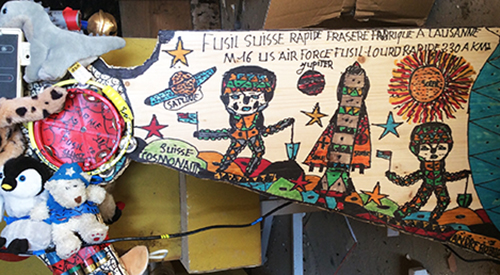 Among the legendary European art brut makers of the 20th century, the French créateur André Robillard is still with us — and he's still going strong. In October, the artist turned up at the Collection de l'Art Brut, the well-known museum in Lausanne, Switzerland, that specializes in art brut and outsider art, for an event commemorating his 90th birthday.

Robillard was born and brought up in Loiret, a département (administrative district below the level of région) in north-central France, where, as a child, he spent much of his time playing outdoors. His father was a gamekeeper, whom André often accompanied on hunting expeditions, becoming familiar with forest plants and animals — and to seeing guns. After his parents divorced, young André lived with his father, but their relationship deteriorated, and his father sent him to a school that was situated within the psychiatric hospital at Fleury-les-Aubrais, a northern suburb of the city of Orléans, also in Loiret.

Robillard was a teenager at the end of World War II, when he reunited with his father. Later, André would be granted an exemption from obligatory military service for, as he once put it, being too “edgy” to take part in an institution as regimented and hierarchical as the armed forces. He was a young adult when, in 1950, he was committed to the psychiatric hospital at Fleury-les-Aubrais. Although, over time, his exact medical or mental-health condition was not precisely diagnosed, at the hospital, he was allowed to live independently, moving into his own residence on the institution’s grounds. He worked at the hospital’s wastewater-treatment facility.

Robillard still lives in and works at his house there in the region he knows so well. In the early 1960s, he began using scraps of wood and leather, along with masking tape, to make replicas of firearms; rifles were one of his main subjects. He rounded up such cast-off materials as tin cans, plush animals and small toys, and metal and plastic parts from old machines and appliances.

The French modern artist Jean Dubuffet (1901-1985), who, in the 1940s, coined the term “art brut” (“raw art”) to refer to the hard-to-classify, unique creations of self-taught artists living and working on the margins of mainstream culture and society, became aware of Robillard’s activity and acquired two of his mixed-media rifle sculptures. Thereafter, the artist exchanged letters with Dubuffet, and when the well-known modernist painter and sculptor donated his personal holdings of art brut to what would become the Collection de l’Art Brut, which opened to the public in 1975, the new museum's founding director, Michel Thévoz, prominently placed them on display.

Robillard first visited the museum in Switzerland in the early 1980s, at which time he was especially impressed by the works of Auguste Forestier (1887-1958), another French autodidact who had used wood, scraps or fur, and assorted found materials to create sculptures of animals, human subjects, and ships.

Sarah Lombardi, the current director of the Collection de l’Art Brut, organized a career-surveying exhibition of Robillard's work, which opened at the museum in 2014. (My article about this big show, which was published in the New York Times in January 2015, can be found here.)

Lombardi told brutjournal: “The event that took place at the museum on October 7, 2021, provided an occasion to recall the great stages of Robillard’s career, for which he has been recognized artistically, and to offer a toast to him in his presence.” Lombardi recalled that, after Robillard’s initial creative phase, which led to Dubuffet’s acquiring of his first two rifle sculptures, the artist fell into an inactive lull.

But in 1977, Thévoz sent him a postcard that had been produced by the Swiss museum showing one of the Dubuffet-gifted rifles that had become one of the early prizes of its initial, core collection. Receiving that card from Thévoz, Lombardi noted, “reactivated Robillard’s will and desire to create — and he hasn’t stopped since then.”

She said that, “although no one has been able to count exactly how many works he has created since 1977, in any case, there are several hundred.” She added, “Robillard continues to make drawings, even though, since 2019, he has stopped creating his rifles. [Today,] whatever the nature of the works he produces, the motivation that has prompted him to create and that still drives him to create more is the need to establish a connection with others, whom he captures in his Polaroid photographs. Artistic creation and music, particularly that of the harmonica and the accordion, have been his companions throughout these many, long years, and it is thanks to them that he has been able to take up a social life and break from his solitariness and isolation.”

For many years, François Vertadier has shown Robillard’s work with enthusiasm and care at Galerie Polysémie, his gallery in the Mediterranean port city of Marseille in the south of France. I’ve had the pleasure of seeing the artist's drawings and sculptures in person at Vertadier's gallery, which is known for its working relationships with highly original art brut artists both in Europe and in certain countries, such as Iran, with which North American dealers specializing in the work of outsider and self-taught artists have had little or no direct contact. Galerie Polysémie participates regularly in the annual Outsider Art Fairs in New York and Paris.

Vertadier, who recently presented an exhibition titled “Happy Birthday, André Robillard” on the occasion of the artist's 90th birthday, told us: “Examining the works of this artist over the span of his career clearly leads to a reconsideration of the ‘impermeability’ of art brut artists in the world and in various artistic settings.” In other words, the dealer implied, the creations of an artist like Robillard are much more accessible to broad audiences than those who have a limited understanding of art brut — and of its diverse thematic scope and multifaceted aesthetic appeal — might assume.

Vertadier added, “As an art brut artist, Robillard nourishes his creativity at the same time through his isolation and by means of external influences. In this way, he is just like any other artist.”

The dealer from Marseille is planning to devote much of his booth at the forthcoming Outsider Art Fair in New York (February 3 through February 6, 2022) to a presentation of works by Robillard, including a series of drawings he has made on towels and bed sheets from the psychiatric hospital in France with which he has long been associated.

Happy birthday, Monsieur Robillard! Long may you continue to surprise — and delight — us with your creativity and imagination! You're a living legend now...

Edward M. Gómez, "Master of 'Raw Art' Keeps to Path," The New York Times, January 15, 2015; article about the exhibition André Robillard, which was curated by Sarah Lombardi and presented at the Collection de l'Art Brut in Lausanne, Switzerland, from November 28, 2014 through April 19, 2015
https://www.nytimes.com/2015/01/14/arts/international/master-of-raw-art-keeps-to-path.html